MiningNewsWire provides insights and opportunities in the mineral and mining sectors.

StorEn Technologies Inc. delivers proprietary vanadium flow batteries aimed at revolutionizing the world of residential and industrial energy storage. With an expected life of 25 years and more than 15,000 cycles, the company’s batteries satisfy market demand for efficient, durable and cost-effective energy storage, enabling self-consumption of self-produced electricity and the transition toward a carbon-free economy.

The company is currently accepting investments through a Reg A+ offering on StartEngine. For more information, view the company’s Offering Circular. To date, StorEn has raised more than $6.7 million from over 5,000 investors on the crowdfunding platform, along with venture capital from the ANYSEED Fund.

A Disruptive Approach to Energy Storage

StorEn batteries are modular and configurable in either 20kWh or 30kWh versions sharing the same Power Module, ensuring that customers only pay for the energy capacity they really need. The ability to connect additional modules allows for maximum flexibility.

Traction in the Market

To date, the total investment in the company’s technology has exceeded $2 million, and it is already putting these efforts to work. StorEn secured a $500,000 order in Australia to provide 30 kWh StorEn vanadium flow batteries to a renewable hydrogen plant at Queensland University of Technology (QUT), where researchers will develop safety standards for the future use of vanadium flow batteries. The first battery – the first of its kind in Australia – was installed in Brisbane in November 2020 at the National Battery Testing Centre (NBTC), a flagship project of the Future Battery Industries CRC. Additional units are being manufactured.

StorEn has also entered into a supply chain deal with Multicom Resources, an Australian mining company which is the owner of two vanadium mines. Through this agreement, StorEn has secured the exclusive availability of vanadium for up to 20 years with either a price cap or at market price, whichever is lower.

Capitalizing on the Australian government’s support to fulfil the country’s energy storage opportunity, Multicom’s subsidiary, Freedom Energy, has agreed to assemble StorEn batteries within Australia and distribute them widely across the wider Asia Pacific region. In addition to an initial pilot plant, Multicom has completed a concept design for a full-scale manufacturing facility for StorEn batteries.

The shift to renewable energy sources is on, with governments around the globe discussing and implementing initiatives to reduce dependence on fossil fuels. McKinsey & Company research suggests that, by 2035, more than 50% of global power generation will come from renewable sources.

Spurred on by this transition, demand for reliable energy storage systems is expected to attain exponential growth in the coming years, positively influencing the energy storage industry landscape, according to Grand View Research.

Data from Fortune Business Insights projects that the global battery energy storage market will reach $19.74 billion by 2027, recording a CAGR of 20.4% from 2020 to 2027. The research firm suggests that improving access to electricity across the globe will be a prominent trend shaping the growth trajectory of this market, which is particularly noteworthy for StorEn and its TITANstack™ grid-scale energy storage solution.

Over a billion people still do not have access to electricity. The electrification of these unserved communities can become a reality with mini grids, using solar plus energy storage. StorEn’s vanadium flow batteries could be a key technology toward providing universal access to affordable, longer lasting and dependable energy. In support this critical mission, StorEn Technologies is a member of the Alliance for Rural Electrification and the Global Off-Grid Lighting Association.

StorEn is led by an executive team with decades of experience in the vanadium flow battery industry.

Founder Carlo Brovero has served as the company’s chief executive officer, treasurer and director since its inception in January 2017. From 2013 to 2019, Mr. Brovero served as a consultant for eCaral Ltd., a management consulting firm. From 2013 to 2015, he served as an advisory board member for Proxhima S.r.l., a vanadium flow battery company, which was sold to the Gala Group, a utility listed on the Milan Stock Exchange. From 2010 to 2016, Mr. Brovero served as International Sales and Marketing Director for iVis Technologies, the manufacturer of an excimer laser therapeutic and refractive platform for corneal surgery. He holds an MBA from Aston University in Birmingham, UK.

Founder Angelo D’Anzi has served as StorEn’s chief technology officer and director since the company’s inception. He is primarily responsible for the technical development of StorEn’s products. Since May 2018, Mr. D’Anzi has also served as a director of Arco Fuel Cells S.r.l., where he is responsible for the company’s fuel cell technical development activities. Mr. D’Anzi co-founded vanadium flow battery company Proxhima in 2013. In 2000, he founded ROEN-EST, a fuel cell company that was eventually acquired by the Morphic Group, a cleantech holding company listed on the Stockholm Stock Exchange. Mr. D’Anzi holds 14 international patents and received the 2003 Sapio Award in the Energy and Transportation category. He holds an MBA from the LUISS Business School in Rome.

Founder Gabriele Colombo has served as secretary of StorEn since its inception. Since 2012, he has also served in various roles ranging from regional manager to CEO with Leonardo Hispania S.A., a subsidiary of the Leonardo Group of Italy, an aerospace, defense and security conglomerate. Mr. Colombo co-founded vanadium flow battery company Proxhima in 2013. He holds an honors degree in computer engineering from the University of Pisa and a master’s degree in business leadership from the University of Genova. 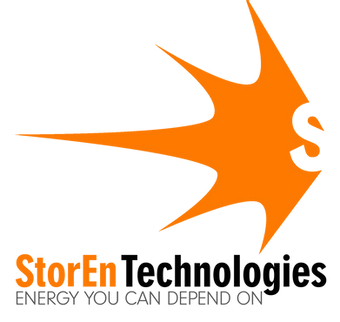